Our Family Cruise – The Carnival Magic Ports of Call

We’re back, as mentioned in my article just last week where I shared our 5 Favourite Things from our First Family Cruise on the Carnival Magic, I’m now sharing more on the Carnival Magic ports of call. This was a 7 day Western Caribbean Cruise aboard the Carnival Magic that we were on for one week last month (July) and it was supposed to have stops in the ports of Belize, Cozumel, Costa Maya and Mahogany Bay Roatan (Honduras). Now I say “was supposed to” because we didn’t make it to Mahogany Bay due to a passenger’s medical emergency we had to re-route.

The good news is we got to see Key West, somewhere my family and I have never been to before and it was a lovely stop indeed. We took so many photos that I couldn’t possibly put them all in this article so I’m creating an online photo album for each port along with more information. Just look for each album after each port of call description below, we’ll add them as they are created. Now on to the fun! These are not in any particular order.

We’ve been to Cozumel twice before but never as part of a cruise. We like Cozumel, the water is clear and  a beautiful blue as it’s the Caribbean Sea and it’s a small town feel. The port has been set up of course for the cruise ships so there’s lots of touristy type of things but if you have the time and the inclination you can take a cab into town for $8-$10 USD,

To see the larger version of these images just click on the image.

We decided to head out with other families from our group to the beach to enjoy some sand and sea and of course some snorkelling. As we were a large group they split us up in two vans but the cost was very reasonable and it included transportation and entrance to this beach area. It was less than $25 for the three of us.

This was one section of the beach

The water did not disappoint, we went to this family-friendly area that had a beach, pool, food and other amenities. If you did not have lifejackets, snorkels or flippers you could borrow them for free, you just had to give them your ship card so they would know you return them. It was a hot day so the water felt great and oh was it ever so clear and beautiful. Oh that was a ton of fun for my hubby, daughter and I, the water was so clear and if you could keep yourself underwater lots of fishes to see.

We spent the day at the beach snorkelling and took about an hour to walk around the port of Cozumel. We did pick up a bottle or two of vanilla, something I always get when we go to Mexico. It was a fun day for all of the families to spend it at the beach.

I must admit that I did not previously know that Belize was a country, not sure what I thought before but that was news to me. It’s a lovely port and out of all the ones we went to it’s the only one that is what they call a tender port. The Carnival Magic and other ships, don’t dock at a pier, we had to disembark while out a bit from land and be brought in by tender boats. That in itself was a bit of an adventure, a new experience for us.

GO HERE to see all our photos of Belize and more about our Altun Ha Maya Site and River Wallace excursion as well. 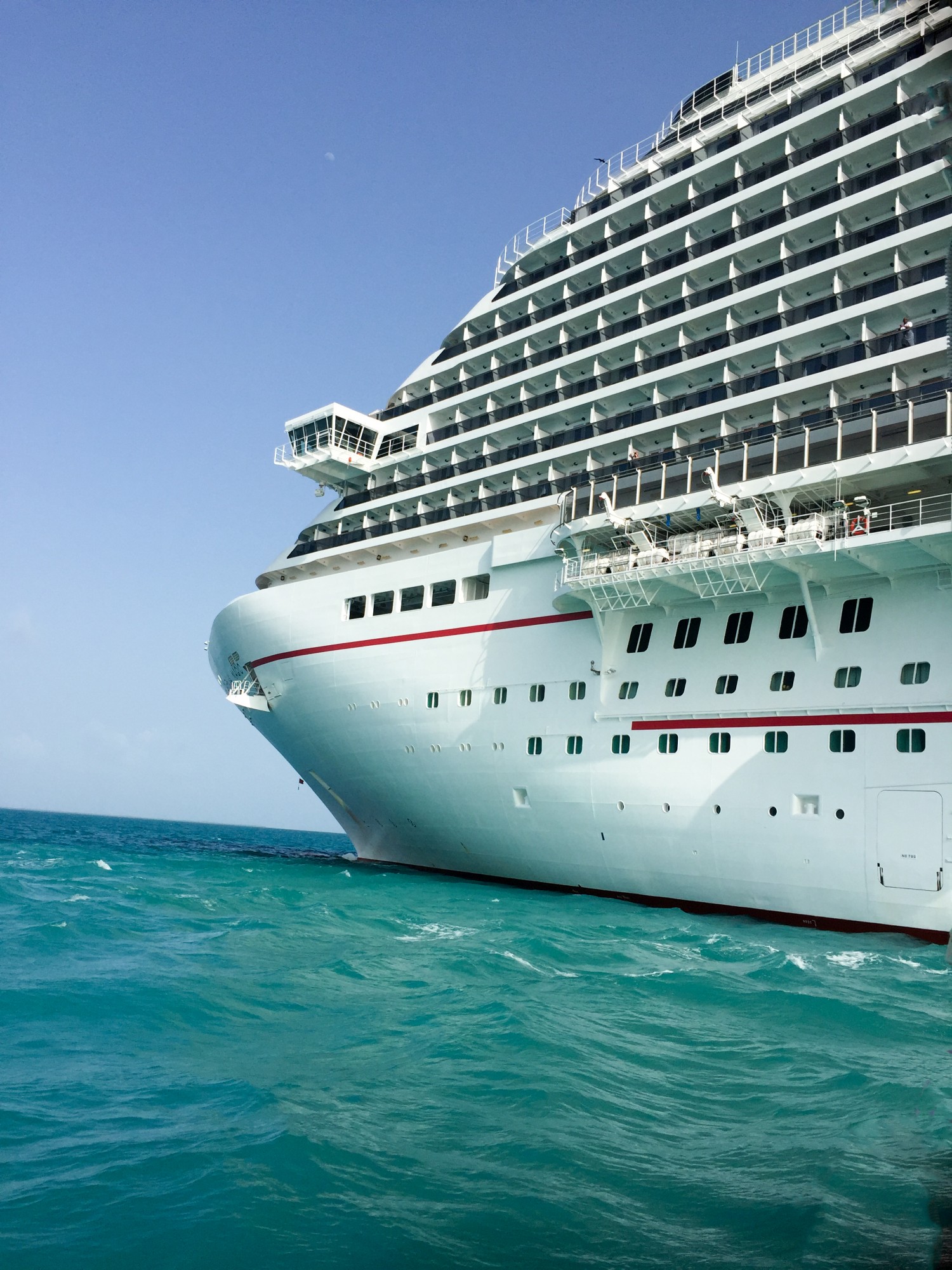 In Belize we had signed up for our first excursion. You can sign up before you board the Carnival Magic or any ship or while on board. Now I will warn you that you have to decide in advance for the most part whether or not you’re going to do an excursion or explore Belize. The more popular excursions can fill up quickly and from our experience you don’t get to do both. We selected the Altun Ha Mayan site and River Wallace tour excursion which pretty much took up our entire time in Belize. It was the more family-friendly option of the excursions, especially for those with younger children.

We knew everyone on this boat as they are all a part of the travel writers group that was invited on this cruise along with myself. It’s definitely a lot of fun to go with those you know but even if you don’t know them it’s interesting. Our tour guide Simone had a great sense of humour and we learned about Belize as we went along. It was a lot of jungle along the river with some homes in certain parts. They had hoped we could see some of the monkeys but that day we were out of luck.

We saw lots of Iguanas on shore.

We had a stop after the river boat tour and hand lunch before heading out in an air conditioned bus to the site of Altun-Ha. Just a warning the boat tour is a few hours and little kids may need to use the washroom. I would suggest not drinking a bunch of water as there technically is not a washroom stop for a few hours but we had to make an unscheduled one as we had lots of younger children on our boat.

It is hot and humid in Belize but it is beautiful. We took rests in the shade and I’ll admit we did not climb to the top as I’ve been to Chichen-Itza which much taller and that’s enough for me. Although I’m told this one was quite easy and it didn’t look bad, I just didn’t feel the need to go to the top.

Another panoramic shot, just click on it to get the full image.

The boat ride was fun and we got to different parts of Belize, learned some history and saw the Altun-Ha site but I definitely would have loved more time to explore.

The unexpected stop of the Carnival Magic to Key West brought us to an area that had more to offer than we realized. There’s a tour of Hemingway’s house with the all the cats, a little aquarium, markets and of course the birthplace of Key Lime Pie one of our favourite desserts ever. We went to the aquarium, explored the market, had some key lime pie and then spent some time on the ship. It’s a nice port with lots of shopping but it is a bit expensive.

There are tons of stores, a market area, many restaurants and tours to be done in Key West. It’s a pretty area, I liked the charm of the town, the older feel of it if you will.

We didn’t go in the museum, there was lots to see just walking around.

We did go to the aquarium which is small but my daughter enjoyed. I like that they had touch pools and that you could get a good look at the sea creatures that were there. They do a lot of rescue and rehabilitation at the Key West Aquarium.

We got to see Nurse Sharks

Watch for our post to come soon on our full experience in Costa Maya along more photos.

Costa Maya was our last port and also where we had our second excursion at the Lost Maya Kingdom Adventure Park. This one is perfect for families with kids who just want to relax by a pool and let the kids go swimming, enjoy a lazy river or a variety of water slides.

We got there about 9am so it wasn’t busy yet, however even when we left in the early afternoon it never felt packed. There were different areas with lounge chairs and because there were so many things to do people were spread out and not really crowded in one area. The only thing I have to say is that the ladies washroom I went to the toilet was tricky, it eventually flushed but took forever. Things parents need to know 😉

Just one of the many waterslides. My whole family enjoyed it and from what I saw everyone who went had a good time. There never seemed to be any long line-ups no matter which ride they went on.

We enjoyed this excursion because it was relaxing mixed with going on rides whenever we wanted. We spent half the day there and then went around the port to see what they had to offer. There were dolphin rides that we saw there but they were in a small pool and I’ve seen much better facilities in other areas. The water however was beautiful and there was a rocky beach area that was nice, once you walked over the rocks and got into the water.

My daughter said that the Lost Maya Kingdom Adventure Park was her favourite excursion and her favourite stop of the entire cruise. I liked the lovely scenery and we did some souvenir shopping for my daughter there. Overall it’s a lovely spot and I would consider going there again to see more of the area.

There you have it all of the Carnival Magic port of calls that we got to see and enjoy on our first family cruise. It was a fabulous family vacation that we won’t ever forget.

A big thanks to SJ Consulting and Carnival Cruise Lines for inviting us to be a part of the #LetsGoCarnival retreat. We enjoyed our first cruise and can’t wait to go on another one. We are cruise converts.

We love summer but it can be too 🥵 so in order

If you're headed to or going to be anywhere near

If you are going to be anywhere near @visitpentict

🍓🍋 Bars are made with sweet strawberries and

We had an amazing dinner tonight @eatatelma here i

Just a little #waterfall we came across while exot

Enjoying my beautiful view today at our #Airbnb wh

These Vietnamese Lemongrass Chicken Skewers are so

Easy Food Prep With A Spice Grinder Do you have a

Yep more #kittens that were #rescued by @threelitt

Bottle fed kittens with the rescue I work with. So

As promised a #recipereel for our Peruvian Chicken